Carol Rumens's poem of the week
Poem of the week: The Lay of the Trilobite by May Kendall
A Victorian satire on evolutionary theory cleverly subverts, through a covert feminist argument, Darwinist ideas about the subjugation of women

A mountain’s giddy height I sought,
Because I could not find
Sufficient vague and mighty thought
To fill my mighty mind;
And as I wandered ill at ease,
There chanced upon my sight
A native of Silurian seas,
An ancient Trilobite.
So calm, so peacefully he lay,
I watched him even with tears:
I thought of Monads far away
In the forgotten years.
How wonderful it seemed and right,
The providential plan,
That he should be a Trilobite,
And I should be a Man!
And then, quite natural and free
Out of his rocky bed,
That Trilobite he spoke to me
And this is what he said:
‘I don’t know how the thing was done,
Although I cannot doubt it;
But Huxley – he if anyone
Can tell you all about it;

‘How all your faiths are ghosts and dreams,
How in the silent sea
Your ancestors were Monotremes –
Whatever these may be;
How you evolved your shining lights
Of wisdom and perfection
From Jelly-Fish and Trilobites
By Natural Selection.
‘You’ve Kant to make your brains go round,
Hegel you have to clear them,
You’ve Mr Browning to confound,
And Mr Punch to cheer them!
The native of an alien land
You call a man and brother,
And greet with hymn-book in one hand
And pistol in the other!
‘You’ve Politics to make you fight
As if you were possessed:
You’ve cannon and you’ve dynamite
To give the nations rest:
The side that makes the loudest din
Is surest to be right,
And oh, a pretty fix you’re in!’
Remarked the Trilobite.
‘But gentle, stupid, free from woe
I lived among my nation,
I didn’t care – I didn’t know
That I was a Crustacean.*
I didn’t grumble, didn’t steal,
I never took to rhyme:
Salt water was my frugal meal,
And carbonate of lime.’
Reluctantly I turned away,
No other word he said;
An ancient Trilobite, he lay
Within his rocky bed.
I did not answer him, for that
Would have annoyed my pride:
I merely bowed, and raised my hat,
But in my heart I cried: –
‘I wish our brains were not so good,
I wish our skulls were thicker,
I wish that Evolution could
Have stopped a little quicker;
For oh, it was a happy plight,
Of liberty and ease,
To be a simple Trilobite


In the Silurian seas!’

Carol Rumens's poem of the week in The Guardian
Each week Carol Rumens picks a poem to discuss.
Written amid the ‘tremendous energy’ of Scotland’s independence campaign, this supple nature poem might be a livelier than usual image of nationhood 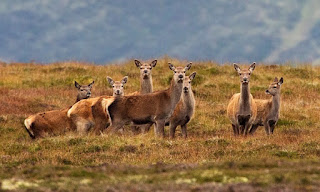 Walking in a waking dream
I watched nineteen deer
pour from ridge to glen-floor,
then each in turn leap,
leap the new-raised
peat-dark burn. This
was the distaff side;
hinds at their ease, alive
to lands held on long lease
in their animal minds,
and filing through a breach
in a never-mended dyke,
the herd flowed up over
heather-slopes to scree
where they stopped, and turned to stare,
the foremost with a queenly air
as though to say: Aren’t we
the bonniest companie?
Come to me,
you’ll be happy, but never go home.

The title of Kathleen Jamie’s lively new collection, The Bonniest Companie, published this week by Picador Poetry, is tucked away in The Hinds, third line from the end. As the poet’s note tells us, the words are an allusion to the Scottish Border Ballad, Tam Lin.
In the ballad, the young knight and virginity-bandit Tam Lin is rescued from enchantment by an intrepid, aristocratic young woman, Janet, whom, luckily, he has made pregnant on their first encounter. At the end of the tale, the Queen complains angrily of Janet that “she has ta’en awa the bonniest knight / in a’ my companie”. The phrase “bonniest companie” has an inclusive resonance for the new collection, whose poems mark the natural cycle of the year, and were written, Jamie records, at the rate of one a week during 2014, drawing on the “tremendous energy” generated in Scotland at that time.
In the poem, of course, “the bonniest companie” are the nineteen hinds, met in “a waking dream”, who thereby acquire an aura of magic – dangerous magic that will engulf the one seduced: “you’ll be happy, but never go home”. A couplet in the wonderfully mystical poem, Less and Less Human, O Savage Spirit by William Carlos Williams, seems pertinent: “It is the human that is the alien,/ The human that has no cousin in the moon.” Confronted by stunningly beautiful animals, simply and powerfully at one with their environment, we may placate our sense of alienation with fantasy connection: might we not run away and join them? Do ancient tales of Faery enchantment and entrapment draw on such fantasies?
The hinds are real animals, of course, probably red deer, and the poem recreates their wiriness and agility in its own wiry shape and agile lines. The verbs-in-apposition that tie them to their upland location suggest controlled energy: poured from, filing through, poured up. Two well-placed “leaps” compress the mass movement (governed by “I watched”) into the individually see-able: “then each in turn leap, / leap the new-raised/ peat-dark burn.” That the “burn” is “new-raised” may suggest recent effects of rainfall: the burn is full and fast. Does “peat-dark burn” carry a tiny echo, perhaps, of “wine-dark sea?” If so, it recalls a thought memorably expressed by the Irish poet, Patrick Kavanagh, defending the Homeric significance of local matters in his war-haunted poem, Epic.
Jamie’s sound-effects range from the subtly consonantal, like “leap”, with its echo of watery hoof-plopping, to the full chords of rhyme: “pour/floor”, “turn/burn”, “ease/lease”, “this/distaff”, etc. The labials of lines eight and nine (“alive/ to lands held on long lease”) evoke the fluidity of the animals’ movement on their own ground. A triple “e/ie” rhyme towards the end, where the boldest hind utters her seductive invitation, is like a simple animal mating-call transcribed into human.
The old-fashioned euphemism “distaff side” marks one of several moments of self-amused anthropomorphism. Jamie’s line-break on “this” signals an emphasis, light-hearted though it may be, on the animals’ gender. Her phrase intimates the social world of the ballad. The hinds also live in a rigidly gendered society, even if their actions hardly seem comparable to the monotonous subservience of ladies spinning the flax. They’re more like Janet, who’s more like a modern woman, free to rove and range.
“Lease” is a loaded word. The deer’s “lease” on the land may well stretch back a long way, but the term that implies temporality and may foreshadow a less settled future. So far so good, perhaps, unless the un-mended breach in the dyke denotes a neglect that won’t always prove benign.
Plain, solid nouns build the mimetic topography: “ridge”, “glen-floor”, “breach” , “dyke” , “heather-slopes”, and the wonderfully onomatopoeic “scree”. “Heather-slope” is a good compound, evoking the depth and layered springiness of heather so thick it seems to be the actual substance of the hill.
Almost suddenly, the poem pauses its flow. Line 15, lengthened a little beyond the others and slowed by its monosyllables, marks the change. From now on, the hinds are standing still, emboldened by distance, perhaps, looking back on the speaker. “Queenly air” is finely judged, and, again, there’s a touch of humour in the conscious anthropomorphism, apparently extended to the almost flirtatious challenge issued by the alpha female.
There’s a characteristic combination of delicacy and brawn in Jamie’s poetry, and both are at work in The Hinds. In its supple energy, the poem might be a riposte to those stiff and gloomy oil-paintings with their antlered images of nationhood, and frequently bearing the title, “Stag at Bay”.
The magic of Jamie’s nineteen hinds is that they are not magic. They’re free and easy and glad-to-be-female, with no hunter – not even a rutting stag – to bother them, or not in the quicksilver moments of the poem. And yet you might read a hint of almost Rilkean challenge in the deer’s invitation: “Come to me,/ you’ll be happy, but never go home”. In other words, perhaps, “You must change your life.”

Posted by Bookgleaner at 9:06 AM No comments:

.
Halfway down: the sight of a doe
through the trees in the meadow.
I stopped to stare at her staring at me.
The silence arced between us like a wire
in a current that equaled strangeness
over time, and since her stare was wild —
so charged with fear the moment froze
on the line of sky and field, man
and deer — she broke our stillness
in her flight from me. I stood alone
but double then as the man on the path
and the memory of the man she carried
with her beyond the meadow into
the next meadow and the meadow after
that where she returned my image
to the field of her forgetting in which


I roamed like a deer myself, remembering.
Posted by Bookgleaner at 9:56 PM No comments: